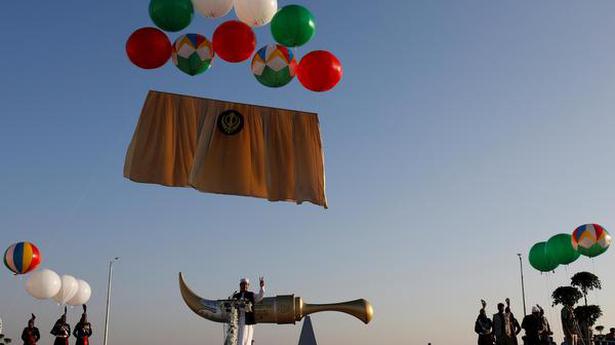 Pakistan Prime Minister Imran Khan raked up the Kashmir issue at the inauguration ceremony of the landmark Kartarpur corridor on Saturday and said ensuring “justice” to Kashmiris will open new channels of communication between India and Pakistan and bring about overall improvement in their relationship.

The Kashmir issue has resulted in accumulation of 70 years of hatred between the two countries and it was time both sides attempt to resolve it for charting a new course of development and prosperity for both the countries, he said.

Mr. Khan hoped that the opening of the Kartarpur corridor will generate goodwill among the Sikh community spread all over the world and compared the Gurdwara Kartarpur Sahib with what Medina — a holy city in now Saudi Arabia where Prophet spent last years of his life — meant for Muslims.

In a rare and landmark people-to-people initiative in the midst of their strained bilateral ties over Kashmir, the Kartarpur corridor was thrown open to Indian pilgrims which will provide them a visa-free entry to one of Sikhism’s holiest shrines in Pakistani town of Narowal.

Mr. Khan inaugurated the corridor by removing a curtain that was lifted by hot air balloons in the presence of thousands of Sikhs from across the world including India. A huge ‘kirpan’ (dagger) was displayed at the inauguration site.

“I am happy we could do this for you,” he told a gathering of over 12,000 devotees, including former Prime Minister Manmohan Singh, Union minister Hardeep Puri, former Punjab Chief Minister Prakash Singh Badal and cricketer-turned-politician Navjot Singh Sidhu.

“Believe me, I had no idea of the importance this place holds; I found out a year ago,” he said.

Ensuring “justice” to Kashmiris will open new channels of communication between India and Pakistan and bring about overall improvement in the bilateral relationship, Mr. Khan said, referring to the abrogation of the Article 370 provisions.

“Hope one day our relationship will improve,” he said.

“I am always so happy to see the Sikh community who have come here. God lives in the hearts of all of us. All the messengers who have come and gone only ever brought two messages, that of peace and justice,” he said.

Speaking on the occasion, Mr. Sidhu told Mr. Khan, “You have won hearts.”

Religious Affairs Minister Noorul Haq Qadri said the opening of the Kartapur corridor is “the biggest message of peace and love” since Partition.

In his address, Foreign Minister Shah Mehmood Qureshi said the doors of Kartarpur have been opened for Sikh pilgrims.

“If the Berlin Wall can be demolished, if the Kartarpur Corridor can be opened, then the temporary boundary of the Line of Control can also be ended,” Mr. Qureshi said, raking up the Kashmir issue during his address on the occasion.

Prime Minister Narendra Modi earlier flagged off the first batch of over 500 pilgrims in Gurdaspur, saying it will be easy to pay obeisance at the Darbar Sahib gurdwara after the opening of the Kartarpur corridor.

Asserting that he is fortunate to be able to dedicate the Kartarpur corridor to the country, Mr. Modi said the opening of the corridor and the integrated check post will bring double happiness to the people.

Prime Minister Imaran Khan, who congratulated the Sikh community on the 550th birth anniversary of Guru Nanak Dev, said the historic opening of the Kartarpur corridor is a testimony to Pakistan’s commitment to regional peace.

“We believe that the road to prosperity of region and bright future of our coming generation lies in peace,” Mr. Khan said in his message on the occasion.

“Today we are not only opening the border, but also our hearts for the Sikh community,” he said.

The inauguration of the corridor comes in the midst of frayed ties between India and Pakistan following New Delhi’s decision in August to withdraw Jammu and Kashmir’s special status and bifurcate the state into two Union Territories.

Notwithstanding a chill in bilateral ties over Kashmir, India and Pakistan after tough negotiations signed an agreement last month, paving the way for the inauguration of the Kartarpur corridor on November 9.

You have reached your limit for free articles this month.

Register to The Hindu for free and get unlimited access for 30 days.

Find mobile-friendly version of articles from the day’s newspaper in one easy-to-read list.

Enjoy reading as many articles as you wish without any limitations.

A select list of articles that match your interests and tastes.

Move smoothly between articles as our pages load instantly.

A one-stop-shop for seeing the latest updates, and managing your preferences.

We brief you on the latest and most important developments, three times a day.

*Our Digital Subscription plans do not currently include the e-paper ,crossword, iPhone, iPad mobile applications and print. Our plans enhance your reading experience.