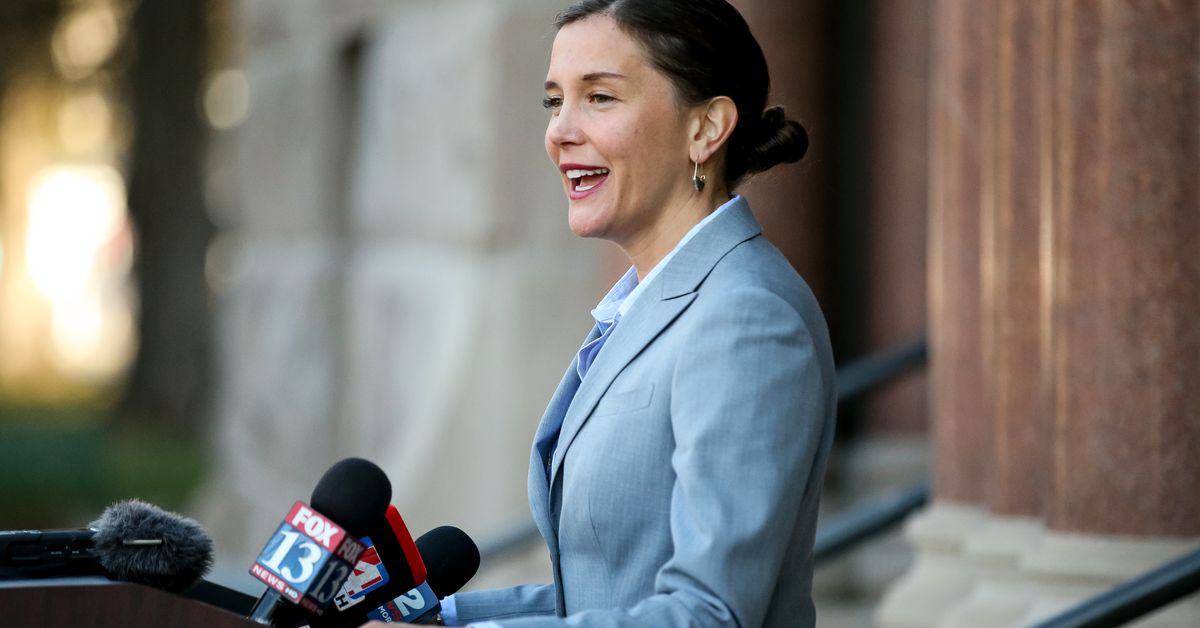 SALT LAKE CITY — Now that Salt Lake City Mayor-elect Erin Mendenhall’s victory in the race to be the next mayor of Utah’s capital city became official with the final canvass, the door is open for the councilwoman to begin her transition into office.

Reinvigorated after a family vacation out of state, Mendenhall was rushing from meeting to meeting this past week, already launching herself into a busy agenda to begin tackling a long to-do list she’s created for her first day in office come January.

“I have an ambitious day one agenda in my mind,” Mendenhall told the Deseret News in a recent interview.

On her list? Air quality initiatives, starting with ordering department heads to evaluate their operations and make a list of recommendations to reduce emissions within 30 days. She also plans to begin scheduling negotiations with Rocky Mountain Power to move up the city’s goal to transition to 100% renewable energy from 2030 to 2023.

Mendenhall also plans to meet with a “consortium of stakeholders” with the aim to implement free transit tickets for all major city events, including games at Vivint Smart Home Arena, The Church of Jesus Christ of Latter-day Saints’ general conferences, events at the Fairpark, and other arts and culture programs.

Mendenhall also said she wants to sit with City Council leadership, her staff and city attorneys to discuss strategy around the Utah Inland Port Authority, the controversial global trade hub at the heart of a legal battle between city and state leaders. The future of the port authority — and whether its creation usurped city power — currently rests in the hands of a judge after state and city attorneys made their first oral arguments in the case.

The judge may hands down a decision by the time Mendenhall takes office, so whatever happens with the case will influence city strategy. Mendenhall also said she wants to set a meeting with Gov. Gary Herbert and Lt. Gov. Spencer Cox to discuss the city’s legislative priorities for this upcoming general session, including potential changes to inland port legislation.

Mendenhall plans to get a running start on homeless issues as well, and she’s not waiting for her first day in office to start. She’s already scheduled meetings to discuss capacity as the transition into the three new homeless resource centers finalizes, following Thursday’s closure of the Road Home’s downtown shelter.

Mendenhall said she’s already met with Salt Lake County Mayor Jenny Wilson, and she plans to meet with the governor this week as a “first formal sit-down” to discuss homelessness and other issues.

“There’s no time to delay on direct engagement,” Mendenhall said, adding that she plans to have a “broad” discussion with the governor to “figure out what we can do better together.”

Between now and Jan. 1, Mendenhall is staying on the Salt Lake City Council in her District 5 seat, saying she doesn’t want to rush her fellow colleagues to pick a replacement for her amid the holidays.

By law, the City Council would have to pick a replacement within 30 days of her resignation, leaving a “consolidated timeline,” she said, with only two council meetings in December to interview candidates.

“So I want to continue representing those 30,000 or so Salt Lakers through December and give the council sufficient time to conduct a selection process,” Mendenhall said.

Because she’s staying on as a councilwoman, Mendenhall is forgoing mayoral pay that would have otherwise been included in transition funds approved by City Council.

Tuesday, the council approved a budget amendment to fund the transition for the new mayor and City Councilman-elect Dan Dugan to the tune of about $142,000 (including $35,000 for a mayoral portrait for outgoing Mayor Jackie Biskupski).

Instead of taking $17,365 that Mendenhall would have been offered as an incoming mayor, that money will be used to pay her incoming communication director, Lindsay Nikola. Additionally, $19,091 will fund Mendenhall’s incoming chief of staff, Rachel Otto, $6,876 will fund her incoming assistant, and $4,340 was approved for Dugan. For capital expenses, about $53,695 was approved to pay for technology and furniture for the incoming mayor and her staff.

This week, Mendenhall announced leadership for a slew of different issue-focused transition committee teams, charging committee leaders to make “recommendations that prioritize inclusiveness and equity, provide a roadmap for a seamless transition, and retain institutional memory while thinking innovatively,” according to a news release issued Thursday.

“This group of subject matter experts and community leaders will spend the next month outlining immediate needs and long term goals for each of my eight committee topics,” Mendenhall said in a statement. “This process will help provide benchmarks for measuring success and ensure that my administration is prepared to address Salt Lake City’s most pressing challenges and opportunities starting on day one.”