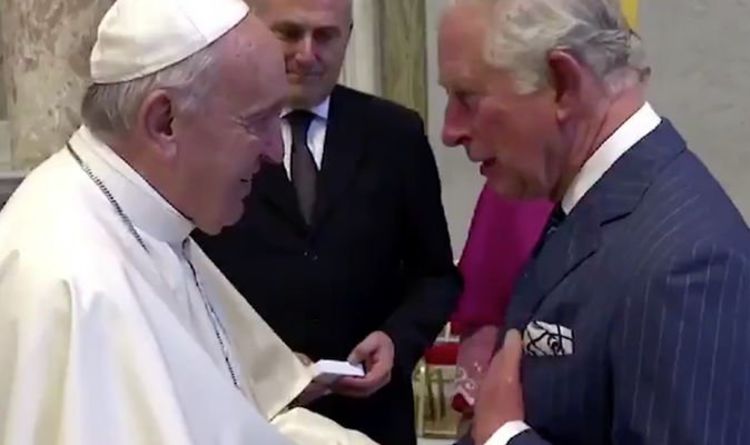 PRINCE CHARLES opened up about his concern on one particular issue during his meeting with Pope Francis at Vatican City.

Prince Charles met with Pope Francis before he leads the UK’s representation at the open-air ceremony in St Peter’s Square. The meeting took place ahead of the Pope canonising five saints, including British Cardinal John Henry Newman. Footage shows the pair shaking hands as Prince Charles says: “Such a pleasure to see you”.

Pope Francis can be heard saying “I read your article”, before Prince Charles says later in the video: “I’m amazed that you do this.”

Prince Charles is then presented with a gift and thanks Pope Francis, before speaking about the pair’s mutual concern for environmental issues.

Pope Francis says “God bless you”, before Prince Charles praises: “A great success on your battle on the environment!”

Charles, 70, who will one day become head of the Church of England took his position for the mass next to Italian President Sergio Mattarella.

During the ceremony Pope Francis will declare the cardinal a saint in front of tens of thousands of pilgrims – the first English saint of the modern age.

In his address Pope Francis called on all Christians to adopt Cardinal Newman’s definition of someone of faith, something he described as being ”kindly lights”.

The pontiff told the crowds: ”Today we give thanks to the lord for our new saints. They walked by faith and now we invoke their intercession.

”Three of them were religious women; they show us that the consecrated life is a journey of love at the existential peripheries of the world.

”Saint Marguerite Bays, on the other hand, was a seamstress; she speaks to us of the power of simple prayer, enduring patience and silent self-giving. That is how the lord made the splendour of the Easter radiate in her life.

”Such is the holiness of daily life, which Saint John Henry Newman described in these words ’The Christian has a deep, silent, hidden peace, which the world sees not…The Christian is cheerful, easy, kind, gentle, courteous, candid, unassuming, has no pretence…with so little that is unusual or striking in his bearing, that he may easily be taken at first sight for an ordinary man’.

”Let us ask to be like that ’kindly lights’ amid the encircling gloom.” On the eve of the ceremony Charles paid tribute to the London-born Cardinal – who died in England in 1890 aged 89.

The heir to the throne said the example set by the revered 19th century theologian, priest and writer is ”needed more than ever”. Newman, an Anglican priest, was renounced an illustrious academic career at Oxford University to convert to Catholicism in 1845, convinced that the truth he sought could no longer be found in the Church of England.

In the Vatican Daily Newspaper L’Osservatore Romano, Charles said: “In the age when he lived, Newman stood for the life of the spirit against the forces that would debase human dignity and human destiny.

”In the age in which he attains sainthood, his example is needed more than ever – for the manner in which, at his best, he could advocate without accusation, could disagree without disrespect and, perhaps most of all, could see differences as places of encounter rather than exclusion.”

The Prince of Wales said the Catholic community in Britain “owes an incalculable debt to his tireless work”.

Charles added: ”His example has left a lasting legacy. As an educator, his work was profoundly influential in Oxford, Dublin and beyond, while his treatise, The Idea of a University, remains a defining text to this day.

”His often overlooked labours on behalf of children’s education are testimony to his commitment to ensuring those of all backgrounds shared the opportunities learning can bring.

”As an Anglican, he guided that church back to its Catholic roots, and as a Catholic he was ready to learn from the Anglican tradition, such as in his promoting the role of the laity. He gave the Catholic Church renewed confidence as it re-established itself in a land in which it had once been uprooted.”