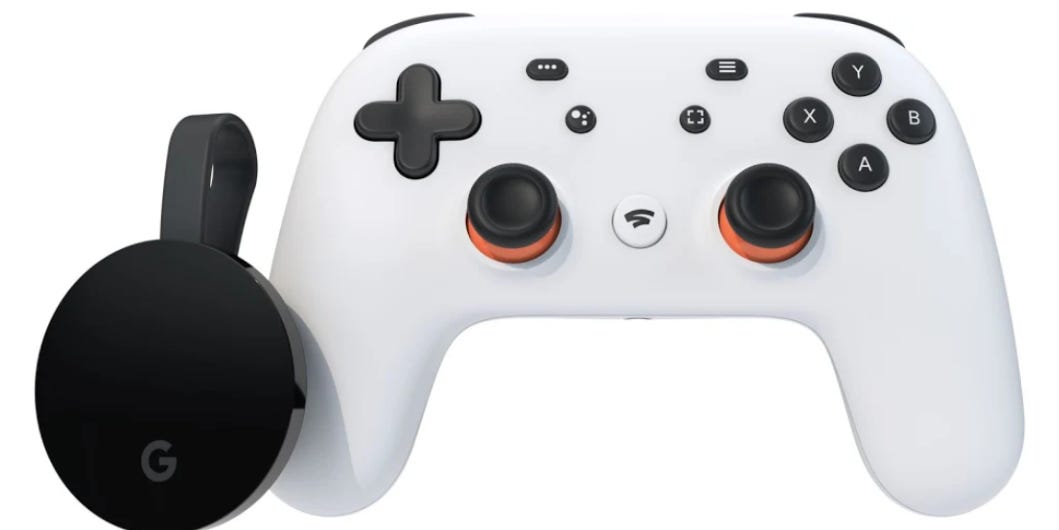 Google is just days away from launching a video game platform intended to compete with the likes of Nintendo Switch, Xbox One, and PlayStation 4.

It’s a hugely ambitious new platform named Google Stadia, and it aims to be the Netflix of gaming. It’s such a big deal, in fact, that Google CEO Sundar Pichai himself introduced Stadia back in March at the 2019 Game Developers Conference.

But with just days to go until the service goes live on November 19, several major red flags have begun waving.

1. There are just 12 games launching with the service, and only one of those games is new.

Of the 12 games coming to Stadia on November 19, a single game — ”Gylt” — is new. There are three ”Tomb Raider” games, making up 25% of the entire launch library.

If you’re playing Stadia at launch, it means you likely shelled out $130 for the ”Founder’s Edition” which includes a subscription to Google’s ”Stadia Pro” service. And Stadia Pro comes with a free game: ”Destiny 2.”

This version of ”Destiny 2” comes with a bunch of add-on content, but the fact remains that ”Destiny 2” is a game that originally came out in 2017.

Worse, ”Destiny 2” is an online-only game that is primarily played with other people — but ”Destiny 2” on Stadia is siloed off from other platforms, meaning you’ll only be able to play with other ”Destiny 2” players on Stadia.

Google has said that another 14 games will arrive on Stadia’s game store by the end of 2019, bringing the total library to 26. The cadence of those releases remains unknown. ”They will be launching frequently and as soon as through proper testing/certification,” a Google representative told us.

2. There are major limitations with the launch units.

There are two ways to play Stadia when it launches in November 19: You can pay $10/month for Stadia Pro, or you can pay $130 for the ”Founder’s Edition” (now known as the ”Premiere Edition”). The latter package comes with Google’s Stadia controller and a Chromecast Ultra — the necessary hardware for playing Google Stadia on a television.

By next year, Google also plans to offer a free version as well with a slightly lower resolution than the 4K/HDR visuals offered in the ”Pro” tier.

But for now, when the service launches on November 19, some of the people who dropped $130 on the Founder’s Edition won’t actually get what they ordered.

Two of Google Stadia’s product leads, Andrey Doronichev and Beri Lee, addressed the issue during a Reddit ”Ask Me Anything” (AMA) on Wednesday.

”You can check your estimated delivery date by logging into [the Google Store] and checking your Order History,” Lee said. ”You’ll get your activation email soon after your order ships. Stadia goes live at 9am PST on Nov 19, and your activation code will work immediately once you receive it. For reference, I ordered my Stadia Founder’s Edition in June and my delivery date says November 20-21.”

Despite Google’s long history of operating a digital storefront that ships physical hardware to customers, the tech giant is unable to fulfill pre-orders for Stadia’s ”Founder’s Edition” on launch day.

You could, of course, just download the Google Stadia app on your phone, activate your Pro account, and start playing before the Founder’s Edition ever arrives. But, as Doronichev points out, ”The best experience at launch is on TV (4K, HDR and all).”

Even if you already own a $70 Chromecast Ultra, you still can’t play Stadia games on a TV without getting a new Chomecast Ultra from Google.

”On Day 1 you should use the Chromecast Ultra that came in your bundle,” Doronichev said during the AMA. ”It has the latest firmware. We will be updating the existing CC Ultras over the air soon after launch.”

All of which is to say: If you already own an Chromecast Ultra, it will eventually work with Stadia. But on launch day, you need to get the Chromecast Ultra that comes in the Founder’s Edition.

4. Much of the standard game console functionality isn’t there with Google Stadia.

If you’re used to the functionality of modern game consoles, you’ll find Stadia lacking at launch.

It doesn’t have achievement tracking, nor much in the way of system settings/customization options, and some functionality — like partying up with friends — is limited to PC and TV, with mobile support coming later.

5. Stadia goes everywhere you are … if you have one of Android’s Pixel phones, a laptop running the Chrome browser, or you’re using a TV with a Chromecast Ultra.

The biggest promise of Google Stadia is accessibility: Your games everywhere, no matter where you are.

Except, at launch, that isn’t the reality.

When are those platforms going to be supported?

”Oh man, I wish I knew,” Doronichev said. ”Truth of the matter is that we want Stadia to run on every screen eventually. Android and iOS and whatnot. We’re starting with Pixel this year. Hope to learn a bunch, make it great and start expanding to more devices next year.”

6. Much of the promised functionality that’s specific to Stadia isn’t ready at launch.

When Google Stadia was first revealed back in March, a handful of Stadia-specific features were touted.

One, called ”State Share,” was demonstrated as sharing a specific spot in a game — a ”save state,” if you will — with a friend, solely by sending over a link. Since Stadia is web-based, simply clicking the link will redirect whoever clicks it to Stadia, to the specific spot in the game.

That function, among others, won’t be available at launch.

”Our approach to releasing features on Stadia is similar to how we run Google Search, YouTube and other Google services: gradual rollout and continuous improvement, based on your feedback,” Doronichev said. ”We always start with nailing the key user-journey and then proceed with releasing extra features. YouTube started with ’watch video.’ For Stadia it’s ’Play the Game on your biggest screen.’ New features will start popping as soon as one week after launch.”

The other features, like Crowd Play and Stream Connect, are said to arrive in 2020. ”And of course there are many more cool new platform features on the roadmap,” Doronichev said. ”We’re aiming to release new stuff weekly after 11/19.”

7. Even Google Assistant on Stadia isn’t ready for launch.

Given that Stadia is a Google product, you might expect it to come with Google’s ubiquitous voice command functionality, Google Assistant.

Moreover, there’s a Google Assistant button quite literally built into the front of the Google Stadia gamepad. But when you get Stadia hooked up and push the button, it won’t actually do anything at launch.

”We have many Assistant features that we’re planning to roll out gradually across different parts of Stadia in the upcoming weeks,” Doronichev said. ”On Day 1, you can ask your Google Home or your Assistant-enabled device to start a game on Stadia. It will turn on your TV and get you into the game! Soon after (I think it’s a few days, but I need to check), you’ll be able to use the Assistant button on your controller to interact with the Assistant while on your Stadia Homescreen on Chromecast. Then more devices (PC, Pixel phones). Then support for the Assistant during gameplay, etc.”

Doronichev explained the lack of Assistant support at launch as a measure of trying to add meaningful voice commands to a gaming platform. ”It’s easy to just slap on some voice features,” he said, ”but making Assistant truly helpful is a different thing. We want to get it right. So we’re taking the time here.”