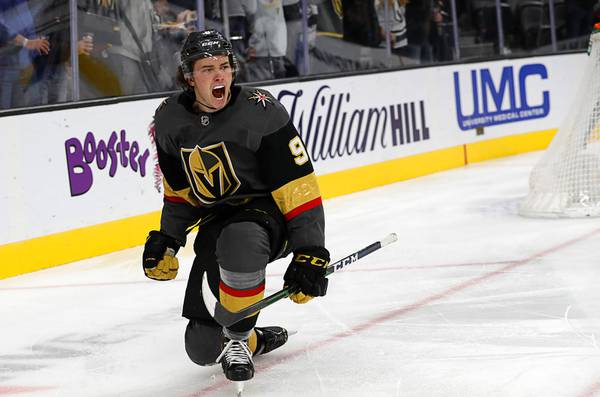 Vegas Golden Knights center Cody Glass (9) celebrates a goal during the third period of a game against the Montreal Canadiens at T-Mobile Arena Thursday, Oct. 31, 2019.

Cody Glass was dubbed the future the second that Vegas took him with the first draft pick in franchise history. Scoring in his debut against San Jose in the season opener didn’t dampen the excitement, and a month into what should be a long career, Glass has looked every bit the player the Golden Knights hoped he would be.

“I think Cody knows he’s an NHL player now, so he’s just developing every game, getting better every game, getting stronger,” coach Gerard Gallant said. “But the biggest thing is for those young kids when they come in and play some games and they have some success, it’s the confidence level. His confidence is good and he looks like a dangerous player every time he’s on the ice.”

Outside of his boyish face, there aren’t many indicators that the 20-year-old Glass isn’t an established NHL player. He’s listed at 6-foot-2 and 192 pounds, right about league average. He’s got seven points in 15 games, seventh among league rookies. The NHL game hasn’t fazed him, although he conceded that playing against Pittsburgh’s Sidney Crosby had him star-struck during warmups.

Perhaps most important, the Golden Knights trust him. He started the year centering Mark Stone and Max Pacioretty, and although he’s played on Cody Eakin’s wing since Eakin returned from injury, Glass is regularly on the power play setting everyone up.

“He’s just a confident kid that goes out there and sees a play and makes it, and more often than not, much more often than not, it’s the right play,” Pacioretty said. “He gets better and better every game, and it’s only a matter of time before he’s going to be dominant in the league.”

Glass’ ability to distribute on the power play is his best attribute and among the best on the team. His best play so far came at home against Nashville on Oct. 15 when he drifted across the crease in front of Predators goalie Pekka Rinne. He then exchanged the puck with Paul Stastny, moved back in front of Rinne to set a screen and caught Mark Stone out of the corner of his eye.

He took Stastny’s return pass and, knowing Stone would move to the slot, dished him a no-look pass that Stone buried. All four Nashville penalty killers had Stone surrounded, but Glass found him in a tight window without looking up. Watch just how close Ryan Ellis (No. 4) comes to getting his stick on the puck.

Glass and Stastny have developed a strong chemistry with the extra man, also connecting on a goal in Pittsburgh on Oct. 19. Glass dumped the puck and while three Penguins converged, Glass moved to the center of the ice. Stastny saw the Penguins out of position, too, and stayed near the faceoff dot. Stone got the puck out of the boards, and it made its way to Glass, who found a wide-open Stastny for an easy goal.

Again, it’s Glass’ speed in getting rid of the puck that makes the play work. Three Pittsburgh penalty killers went to the puck, but if Glass were a split-second slower, Jack Johnson (No. 3) would have broken up the play.

His 5-on-5 play hasn’t kept pace with his power-play prowess (three of his seven points). Part of that disparity is his linemates. In 38:28 of ice time with Stone and Pacioretty, Glass helped the Golden Knights get 56.9% of shot attempts, 57.5% of expected goals and 58.5% of scoring chances, according to Natural Stat Trick.

Eakin and Glass have been together at 5-on-5 for 92:58. In that time, the Golden Knights have 41.4% of shot attempts, 41.4% of expected goals and 47% of scoring chances. In those instances, Glass has played right wing instead of center.

Granted, players will be better on a line with Pacioretty and Stone, and Stastny statistically has shined as their center. But it’s fair to wonder if Glass’ on-ice performance would improve with other linemates or if he played center.

“I think I have a lot more to give,” Glass said. “I think I show spurts of it throughout the game, there will be a couple of shifts, I just need to be more consistent in my game and play more dominant with how I know I can play. I think it’s only going to get better from here.”

Glass has been a good fit in the VGK family off the ice as well.

The shift in hockey culture over the years may have played a role in his smooth assimilation. The rookie hazing and veterans chirping young players are no longer as prevalent. Pacioretty says he views Glass not as a rookie in need of mentoring, but as just another teammate.

“I have nothing to complain about,” Glass said. “They’ve been really awesome to me and that’s something I really love seeing as a rookie coming in.”

The downside to Glass’ promotion is the age difference. Not only is he younger than most of the roster (the average age is 29), most of the team is married with kids. When the team is at home, as it has been for nine of 15 games, the veterans spend time with their families.

Although teammates often invite him over for dinner, those opportunities are limited.

“We’re coming up to a stretch here where we’re on the road more and it will be easier to go out with the guys,” defenseman Deryk Engelland said. “Guys like him, it’s a lot more difficult here at home when 95% of the team has kids and you’re at home with family and he’s one of the select few that doesn’t have a family here.”

As the Golden Knights embark on a four-game road trip starting tonight in Columbus, it gives Glass even more bonding time with teammates. He also appreciates life on the road, with the comfortable air travel and luxury hotels. Last year with Portland of the Western Hockey League, he was accustomed to long bus rides for road games.

“Here you fly out the day before, two days before, so that’s kind of a nice twist,” Glass said. “I’ve been enjoying it so far here.”

Glass, meanwhile, still lives in a hotel. Even though he can’t yet order a cocktail when the team goes out for dinner, it might be time for the budding star to go ahead and make that down payment on a home soon. He’ll be here awhile.