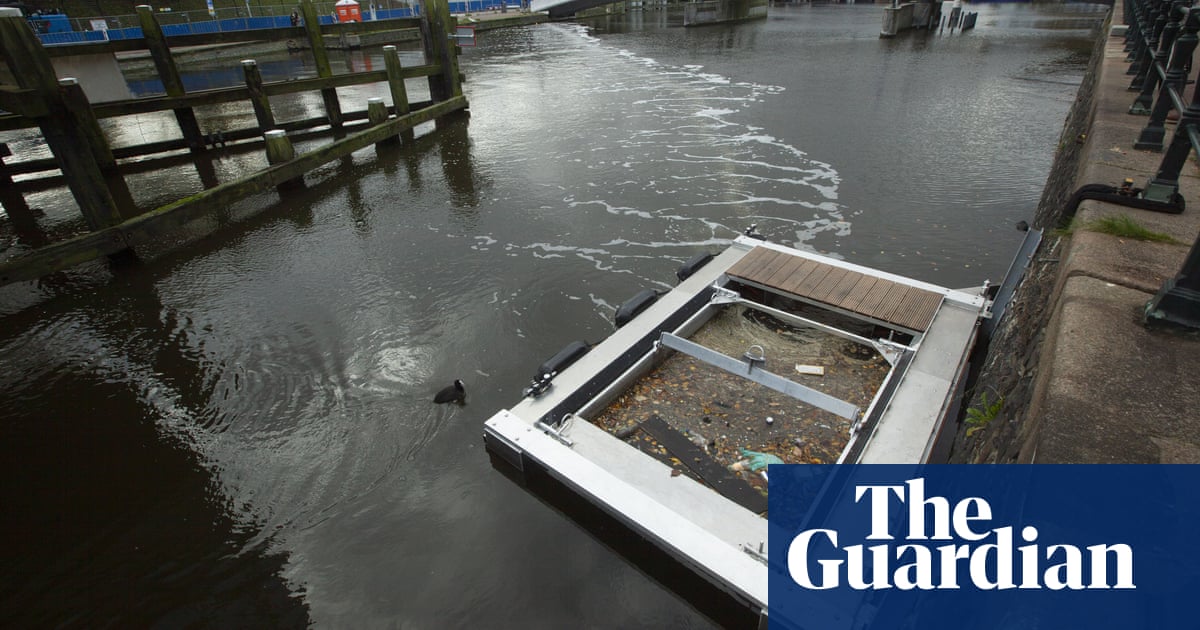 Invention to block waste, but not boats or wildlife, arrives in Dutch city’s famous waterways 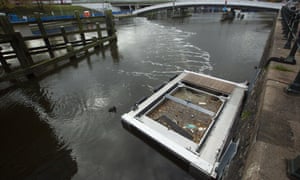 The Great Bubble Barrier is being installed in the Westerdok canal in Amsterdam in a three-year pilot scheme.
Photograph: Peter de Jong/AP

The world’s first rubbish barrier made entirely from bubbles has been unveiled in Amsterdam in an attempt to catch waste in the city’s canals before it reaches the North Sea.

A Dutch start-up, the Amsterdam municipality and the regional water board launched the Great Bubble Barrier, a simple device that channels rubbish – especially small pieces of plastic – to the side of the Westerdok canal where it can be retrieved. Tests have shown it can divert more than 80% of flotsam.

“More than two-thirds of plastics in the ocean comes out of rivers and canals – so if you have to intercept it, why not do it in the rivers?” says Philip Ehrhorn, co-inventor of the technology. “You can’t put a physical barrier in a canal: it has to be open for wildlife and recreation.”

The hope is that the innovation will help to address the mounting crisis of plastic waste in the ocean. Estimates suggest as much as 8m tonnes of plastic ends up in the world’s seas each year – the equivalent of one truckload of old bottles, trays and containers every minute.

The bubble barrier is a long, perforated tube running diagonally for 60 metres across the bottom of the canal. Compressed air is pumped through the tube and rises upwards, and then the natural water current helps to push waste to one side. It is trapped in a small rubbish platform on the side of the Westerdokskade at the tip of Amsterdam’s historic canal belt.

Ehrhorn, a German naval architect and ocean engineer, got the inspiration from a water treatment plant he saw while studying in Australia in 2015. “At one stage they aerate the water, and on a big surface put air bubbles like a big jacuzzi,” he said.

“The small plastic pieces that people throw in the toilet all collected in one corner and that was the kind of spark for me. If you can guide plastic to the side, can’t you do it in a more directed way and on purpose in a river?”

At the same time, three keen Dutch amateur sailors and friends, Anne Marieke Eveleens, Francis Zoet and Saskia Studer, were discussing the problem over a beer in Amsterdam one evening and came up with the idea of a curtain of bubbles that sifts out waste but lets fish and boats through over a beer one evening in Amsterdam. The two teams came together to work on the idea, with the help of a €500,000 Postcode Lotteries Green Challenge award and other prizes.

The first operational barrier in Amsterdam – due to run 24 hours a day for three years – aims to supplement dredging operations, which currently collect 42,000 kg of larger plastics from the Dutch capital’s waterways each year. Bubble barrier waste will be separately collected, then analysed by plastics action group Schone Rivieren (Clean rivers).

Marieke van Doorninck, head of sustainability for Amsterdam council, hopes it will be a successful example. “Amsterdam’s canals have enormous appeal,” she said. “But when you think of them, you don’t think about plastic bottles and bags in the water. The bubble barrier will mean fewer plastics reach the ocean, and is a step towards better regulation of our ecosystem, to the benefit of man, beast and environment.”

In the small, waterlogged country, this kind of innovation is welcome. Bianca Nijhof, managing director of the Netherlands Water Partnership, who organises the Amsterdam International Water Week conference, running this week, added: “The Dutch live with the water and don’t fight against it: 50% of the country is below sea level, more than half is prone to flooding and in 2018 we had severe drought,” she said. “This special relationship with water combined with an entrepreneurial mindset mean that innovation is at our core. The bubble barrier is one solution for clean water for all.”