ABBATH played a disastrous two-song concert in Buenos Aires, Argentina on Wednesday (November 13), resulting in some fans requesting a refund.

According to report on the local metal site El Culto, the doors to Club Palermo opened two hours later than scheduled, forcing support acts DESCARNADO and MEDIUM to play heavily abbreviated sets. When ABBATH finally took the stage, the group consisted only of its visibily inebriated namesake frontman (real name Olve Eikemo) alongside bassist Mia Wallace and drummer Ukri ”Uge” Suvilehto. Rumors had spread earlier in the day that Abbath had gotten into an argument with guitarist Ole André Farstad, who reportedly decided to stay at the hotel and skip the gig.

ABBATH reportedly tried to open the concert with ”Count The Dead” at least twice, only for the frontman to drop his guitar on the ground after 10 seconds and throw himself into the crowd. They then tried to perform a ”very poor version” of the song ”Tyrants” by Abbath's former band IMMORTAL, before Abbath left the stage and was taken to the dressing room, from which he did not re-emerge to finish the set.

The fans' anger quickly flooded social media, with many of them asking for the return of their money.

ABBATH was scheduled to perform tonight (Thursday, November 14) at El Sótano Pub in Comodoro Rivadavia, Chubut, Argentina, but that show was canceled by the promoter earlier today. The band was touring South America in support of its second album, ”Outstrider”, which was released in July via Season Of Mist. It is not presently clear if any of the other dates on the trek will be affected.

”Outstrider” marks ABBATH's second release since the frontman's exit from IMMORTAL. The highly publicized legal battle in 2014 over the rights to the IMMORTAL name pitted Abbath against co-founder Demonaz (real name: Harald Nævdal) and drummer Horgh (real name: Reidar Horghagen), with Abbath claiming the pair abandoned IMMORTAL after they moved their gear out of the band's rehearsal space. The Norwegian court systems determined otherwise, and awarded the IMMORTAL name to Demonaz. 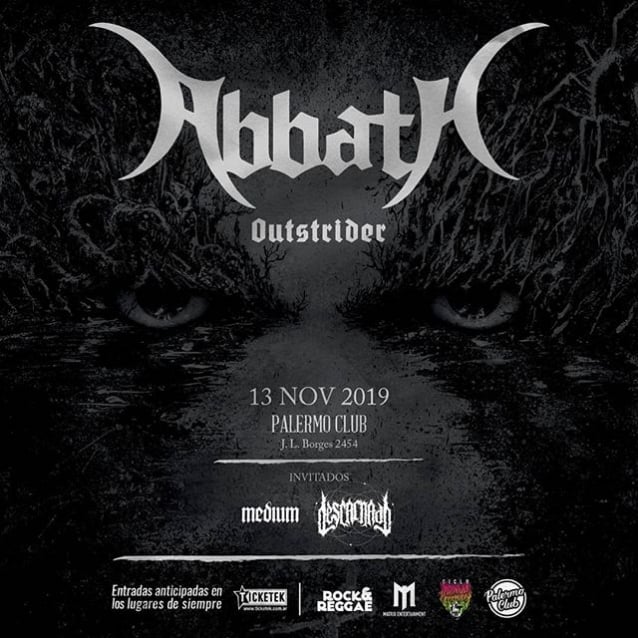